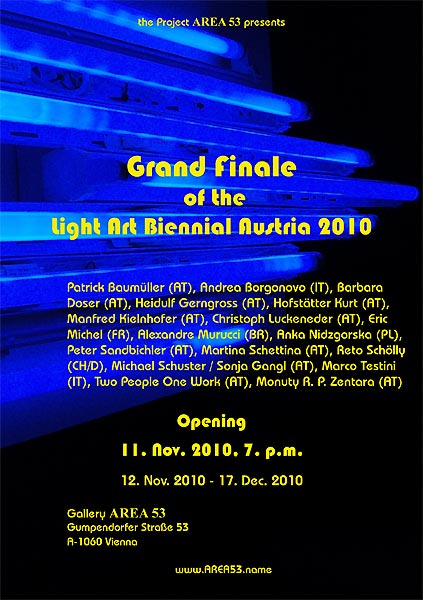 The „Biennale für Lichtkunst Austria 2010“ is a non-commercial biennial of light art-projects and the first biennial of light art that happende in Austria. The biennial 2010 has the slogan „private light in public spaces“ and runs in several Austrian cities in the autumn of 2010. It started at September 1st in Linz, nearly at the same time as the ars electronica festival which started at September 2nd. The organisation is done by Gallery Artpark Linz, consultant is Peet Thomsen (USA/Copenhagen/Linz). The selection of the artists was curated. Members of the jury were artists and curators, one of them Laura Plana Gracia from Spain.

This first Biennial for Light Art in Austria wants to generate a cut surface between society and art. The spontaneous conjunction with art in public spaces leans on the art concept of Joseph Beuys from 1965 “How to define the paintings to the dead rabbit” in Düsseldorf. A dialogue should arise between art and the public. The concept was made by the two founders of the Light Art Biennial, Manfred Kielnhofer and Martina Schettina.